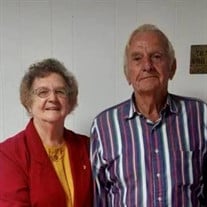 Mr. Wilburn Lavoid “W.L.” Harkey, 90, and Ann Adams Harkey, 90, of Fort Lawn passed away at MUSC Health – Lancaster Medical Center. W. L. was born July 24, 1931 in Heath Springs, a son of the late John Evans “Jake” Harkey and Sallie Bailey Harkey and died on September 24, 2021 and Ann Adams Harkey, 90, was born September 10, 1931 in Lancaster a daughter of John Henry Adams and Laura Adams and died on September 28, 2021 A. U.S. Army Veteran of the Korean War, W. L. was a member of the Fort Lawn Church of God and had owned and operated Catawba Termite Control from 1962 to 1992. He was a Mason and member of Jackson Lodge # 53 and of the Hejaz Shrine Temple. Ann had retired from Springs Industries and was a homemaker. A service to celebrate the life of W. L. and Ann will be held Friday, October 1, 2021 at 1:00 p.m. from the graveside at Elmwood Cemetery in Fort Lawn with the Rev. Jerry Barrineau officiating. W. L. and Ann are survived by a son, Wayne L. “Skip” Harkey and his wife Sandy of Lancaster; a granddaughter, Brittany Harkey Gibson and her husband Cass; and three great grandchildren, Colton, Sawyer, and Landry and was preceded in death by a son, Robbie Evans Harkey. In addition W. L. is survived by a sister Donna Ward and her husband Harold Ward of Lancaster and Ann is survived by a sister Mary Hancock of Rock Hill. In addition to his parents and son, W. L. was preceded in death by three brothers, Carolis Maurice Harkey, John Edward Harkey and Maxwell Young Harkey; and a sister, Carolyn Fuller; and addition to her parents and son, Ann is preceded in death by three brothers, John Adams, Dillon Adams and Carson Adams and four sisters, Louise McAteer, Euthalea Gay, Sara Jackson and Lola Bingham. The family will receive friends following the service at the cemetery. Lancaster Funeral Home & Cremation Service is serving the family of Mr. Harkey.

The family of W. L. & Ann Harkey created this Life Tributes page to make it easy to share your memories.

Send flowers to the Harkey family.