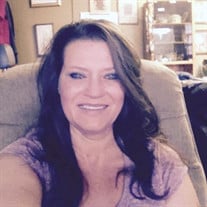 Ms. Stacy Elaine Sherrill, 48, of Lancaster, passed away Friday, June 25, 2021 at MUSC Health – Florence Medical Center. She was born April 24, 1973 in Lancaster, a daughter of Hazel Ann Roberts of Lancaster and the late Robert Lee “Butch” Sherrill, Jr. A service to celebrate the life of Ms. Sherrill will be held on Monday, June 28, 2021 at 2 p.m. at the Chapel of Lancaster Funeral Home. Burial will be in the Lancaster Memorial Park. Surviving are her daughter, Brittani Funderburk and her husband, Joseph of Lancaster; two sisters, Ronda Humphries and Lisa Lucas, both of Lancaster; two grandchildren, Liam and Laila Funderburk; and a special niece who became a sister early in life, Leah Sherrill. She was preceded in death by her father, Robert Lee “Butch” Sherrill, Jr.; and two sons, Trey Hunter Evatt and Alexander Hugh Evatt. The family will receive friends from 1 p.m. until 2 p.m. on Monday, June 28, 2021 at Lancaster Funeral Home and other times at the home of Ronda Humphries, 2797 Merritt Lane in Lancaster. Memorial contributions may be made to Lancaster SPCA, P.O. Box 3042, Lancaster, SC 29721. Lancaster Funeral Home & Cremation Service is serving the family of Ms. Sherrill.

The family of Stacy Elaine Sherrill created this Life Tributes page to make it easy to share your memories.

Send flowers to the Sherrill family.