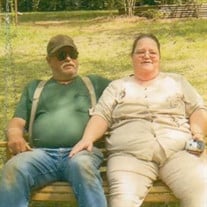 Robert “Bob” Scott, 75, and Renise “Diane” Scott, 69, of Lancaster passed away Saturday, September 25, 2021. Bob was born June 7, 1946 in Grand Island, Nebraska, a son of the late Leonard Edwin Scott and Norma Jean Rothrock. Diane was born July 9, 1952, in Lancaster a daughter of the late Luther Whitaker and Edna Faulkenberry Whitaker. Bob and Diane both loved their families and each other and enjoyed spending time with their family. Bob was a US Navy Veteran and enjoyed fishing and hunting. Diane enjoyed gardening and flowers. A service to celebrate their lives will be held Monday, October 4, 2021 at 3:00 p.m. at the Chapel of Lancaster Funeral Home with Pastor Humphries officiating. Robert and Diane are survived by their three sons, Jason Scott and his wife Kathleen, Matthew Scott, and Gage Scott, all of Lancaster; four daughters, Denise Ashley and her husband James, Cindy Moseley, Tina Whitaker and her husband Tracey, and Kelly Harris and her husband Shane all of Lancaster; eleven grandchildren and four great grandchildren. Additionally Bob is survived by four sisters, Audrey Gartner and her husband Dale, Sandra Scott, Chris, and Kay; and Diane is survived by two brothers, Gary Whitaker and his wife Dale and David Whitaker and his wife Darlene; and two sisters, Edna Thomas and Patsy Kellim and her husband Jim. Diane was preceded in death by a brother, Wayne Whitaker. The family will receive friends from 2:00 p.m. until 3:00 p.m. Monday, October 4, 2021 at Lancaster Funeral Home. Notes to the family may be made at www.lancasterfuneralhome.com. Lancaster Funeral Home & Cremation Service is serving the family of Bob and Diane.

The family of Robert & Diane Scott created this Life Tributes page to make it easy to share your memories.

Send flowers to the Scott family.