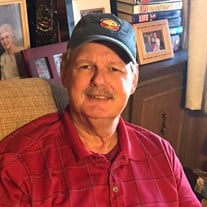 Mr. Randy Lee Williams, 64, of Lancaster passed away Monday, January 20, 2020 at his home after a 2 ½ year battle with colon cancer. He was born January 28, 1955 in Monroe, NC, a son of the late Billy Carson Williams and Hazel Griffin Williams. Mr. Williams was a proud graduate of the University of South Carolina receiving his degree Cum Laude in 1990. He enjoyed attending and competing in all sports especially basketball, tennis and golf. His nickname “Radar” came from his ability to shoot the basketball from anywhere on the basketball court. Always a competitor, in his early life, he enjoyed competing in community tennis tournaments and company golf tournaments. In his later life, he enjoyed competing in the weekly family “Al Snow” golf tournament with his wife Suzanne as teammate against his older brothers Tom and Doug. Mr. Williams enjoyed thrift shopping for trinkets, especially for artwork and gifts for his grandchildren. He was extremely talented and accomplished within his 46-year career in the textile industry starting at the age of 16. He began his career with Springs Industries at Grace Bleachery. He continued his career at several other companies including Thomaston Mills, Avondale Mills, Color Solutions International, Springfield LLC and Suminoe Textile America. He held many titles within the textile industry including Laboratory Manager and Process Engineer. Mr. Williams was a member of St. Luke United Methodist Church. A service to celebrate the life of Mr. Williams will be held Thursday, January 23, 2020 at 2:30 p.m. at St. Luke United Methodist Church with the Rev. Perry Evatt officiating. Mr. Williams is survived by his wife of 42 years, Suzanne Bailey Williams of Lancaster; two sons, Randall Williams and Garrett Williams both of Rock Hill; a daughter, Julia W. Reynolds and her husband Randall of Lancaster; three brothers, Howard Williams and his wife Debbie of Lancaster, Doug Williams and his wife Marie of Charlotte and Tom Williams and his wife Lynn of Fort Mill; two grandchildren, Isabella Reynolds and Noah Reynolds; his mother-in-law, Marian M. Bailey and brother-in-law, Michael Bailey both of Lancaster; and many nieces and nephews. He was preceded in death by a sister, Cynthia W. Bowers. The family will receive friends from 1:30 p.m. until 2:30 p.m. Thursday, January 23, 2020 at St. Luke United Methodist Church and other times at the home of Randy and Suzanne. Memorial contributions may be made to the charity of one’s choice. Lancaster Funeral Home & Cremation Service is serving the family of Mr. Williams.

Mr. Randy Lee Williams, 64, of Lancaster passed away Monday, January 20, 2020 at his home after a 2 ½ year battle with colon cancer. He was born January 28, 1955 in Monroe, NC, a son of the late Billy Carson Williams and Hazel Griffin Williams.... View Obituary & Service Information

The family of Randy Lee Williams created this Life Tributes page to make it easy to share your memories.

Send flowers to the Williams family.