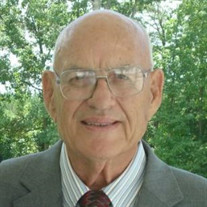 Paul Montgomery Smith, Sr., 84, died Tuesday, April 27, 2021. He was the son of the late Jesse and Florence Smith and was born on June 13, 1936. He was married to Nellie Ree Johnson Smith for 63 years. He is survived by his children: Linda Smith Rankin (Binky) of Loris, Sandra Smith Cassell (Dan) of Columbia, Paul M. Smith, Jr. (Eileen) of Hemingway, and Jeffrey D. Smith of Leesville. Also surviving are his seven grandchildren: Joseph Williamson (Marie), Jason Williamson, Byron Owens, Barrett Owens (Brittany), Brandon Owens, Stuart Smith Powell (Brandon), and Zachary Smith (Brittany) as well as eight great-grandchildren: Grover and Garner Williamson; Larkin, Morgan, Sawyer Caroline, and Rowan Powell; and Harper and Stella Kate Smith. In addition are his brother-in-law Mike Johnson (Pat) of Lancaster, and sister-in-law Sandra Antley Johnson of Columbia and many nieces and nephews. He graduated from Lancaster High School (1956), attended the University of South Carolina (Columbia), and received his theological degree from Southeastern Baptist Theological Seminary in Wake Forest, NC. Paul was known as a kind, generous, intelligent man who inspired people with his faith and hope in God. After his love and devotion to our heavenly Father, he loved his family and instilled in them strong values that have served them well. He lived by the motto of these words, Faith, Family and Friends. He was a wonderful husband, father, grandfather, great-grandfather, son, uncle, brother, minister, and friend. He was passionate about his love for the Lord and was known for his sense of humor and amiable personality. Every opportunity he shared the gospel of Jesus with the desire for all to receive salvation. One of his lessons from Charles Spurgeon was when preaching, “Get to Jesus as fast as you can.” Written in the front of his beloved Scofield Bible are these words, “This book will keep me from sin, but sin will keep me from this book.” His ministries included: North Side Mission (March 1968 – August 1968) Beaver Creek Baptist Church (August 1968 – May 1972) Pleasant Hill Baptist Church (May 1972 – October 1983) Denny Terrace Baptist Church (October 1983 – July 1998) Interim Pastor – Temple Baptist Church -- (November 1998 – June 1999) Interim Pastor – University Baptist Church – (July 1999) Heath Springs Baptist Church (August 1999 – April 2005) Fork Hill Baptist Church (July 2006 – May 2007) Beaver Creek Baptist Church (July 2007 – August 2012) Catawba Baptist Church (February 2013 – March 2015) Services will be held at White Spring Baptist Church in Lancaster, Saturday, May 1, at 3 p.m. with visitation at 2 p.m. at the church. Burial services will be held at Lancaster Memorial Park. In lieu of flowers, the family requests that memorials be made to the church of your choice. Lancaster Funeral Home and Cremation Service is serving the family of Rev. Smith.

Paul Montgomery Smith, Sr., 84, died Tuesday, April 27, 2021. He was the son of the late Jesse and Florence Smith and was born on June 13, 1936. He was married to Nellie Ree Johnson Smith for 63 years. He is survived by his children:... View Obituary & Service Information

The family of Rev. Paul Montgomery Smith Sr. created this Life Tributes page to make it easy to share your memories.