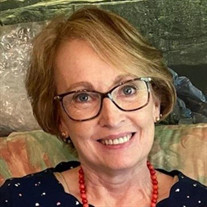 Mrs. Laura Horton Watts, 58, formerly of Lancaster, SC, widow of Philip Alexander Watts, passed away peacefully and entered into her heavenly home on Thursday, August 5, 2021 at her home in Columbia, SC. She was born October 29, 1962 in Lancaster, SC, a daughter of the late Benjamin Floyd Horton and Dorothy Virginia Morgan Horton, of Lancaster, SC. Mrs. Watts attended Erskine College where she earned a Bachelor of Science degree in Chemistry. She went into a STEM field of work before it was a thing for females to do where she worked as a Chemist for the Department of Health and Environmental Control in Columbia, SC. Some of her favorite pastimes included gardening, interior decorating, arranging flowers, but most of all she loved doting on her children, grandchildren and family with style, grace and strength. A service to celebrate the life of Mrs. Watts will be held Monday, August 9, 2021 at 3 p.m. at Tabernacle United Methodist Church with the Rev. Larry King officiating. Burial will be in the Tabernacle United Methodist Church Cemetery. The family requests that masks be worn and practice social distancing. Mrs. Watts is survived by a son, Nolan Ryan Watts and his wife Cameron of Matthews, NC; a daughter, Amanda Lauren Watts of Charleston, SC; a brother, Myron Horton and his wife Debbie of Eden, NC; two grandchildren, Caroline Elisa Watts and Hudson Philip Watts; and several nieces and nephews. For those who wish, memorials may be made to the American Cancer Society, 200 Center Point Circle, Suite 100, Columbia, SC 29210. The family will receive friends from 2 p.m. until 3 p.m. Monday, August 9, 2021 in the fellowship hall of Tabernacle United Methodist Church. Lancaster Funeral Home & Cremation Service is serving the family of Mrs. Watts.

Mrs. Laura Horton Watts, 58, formerly of Lancaster, SC, widow of Philip Alexander Watts, passed away peacefully and entered into her heavenly home on Thursday, August 5, 2021 at her home in Columbia, SC. She was born October 29, 1962 in Lancaster,... View Obituary & Service Information

The family of Laura Horton Watts created this Life Tributes page to make it easy to share your memories.

Send flowers to the Watts family.