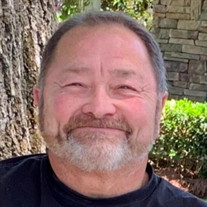 It is with profound sadness that we announce the passing of the greatest man in our lives, Mr. John “David” Yarborough, Jr. David was the type of person that you would want to be- kind, generous, funny, selfless, strong yet sensitive, and would do anything for his family and friends. He had a deep love of Rock and Roll, American muscle cars, always having a fresh cut lawn, going all out for every holiday, action movies, scuba diving, four letter words, ice cream, and anything that could make him laugh. He was a master craftsman who single-handedly built his beautiful home, and worked on thousands more homes all over South Carolina. He was always willing to help out a neighbor, truly believed in helping those in need, all while knowing how to make a perfect cornbread. David had a tremendous love of animals, especially his bulldogs, Joe, Rocco, and Ollie. Most nights you could catch him outside grilling hamburgers for the pups while blasting some classic hits, or pulling them around the neighborhood in the wagon when they got too old to walk. He met the love of his life, Amyree Yarborough, about 41 years ago at Springs Mills, and was instantly smitten. They started dating and he proposed constantly, because he knew he wanted to spend the rest of his life with her. About a year later, they got married and decided to start a family. They had their son, Jonathan David Yarborough and their daughter, Kimberly “Kimby” Brooke Yarborough about two years later. Family meant everything to David. Everything he did in his life was for his family, and his love for them was limitless. He never missed a day of telling them how much he loved them. He found his faith a little later in life, and loved the guidance and support that he found within his church. Heaven really did get one of the good ones with David. David is survived by his wife, Amyree, and his two children, Jonathan and Kimby Yarborough; his mother, Carolyn Hunter, his brother Wayne Wright, and his two sisters, Terri Brooks and Tina Altman. Join us for a celebration of life at Lancaster Funeral Home on Monday, August 31, 2020. The family will receive friends from 5:00-6:00 pm, with a service following. In lieu of flowers, donations can be made at Chester County Animal Care & Control. And we all recommend that you live a little more like David- tell those around you that you love them more, help others when you can, and love your pets, because they love you unconditionally. Lancaster Funeral Home & Cremation Service is serving David’s family.

It is with profound sadness that we announce the passing of the greatest man in our lives, Mr. John &#8220;David&#8221; Yarborough, Jr. David was the type of person that you would want to be- kind, generous, funny, selfless, strong yet sensitive,... View Obituary & Service Information

The family of John David "The Vinylman" Yarborough Jr. created this Life Tributes page to make it easy to share your memories.

It is with profound sadness that we announce the passing of the...

Send flowers to the Yarborough family.