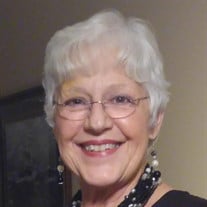 Jane Kevin Frechette Shropshire, 75, passed away at home in Indian Land, SC, Friday, April 1 with her husband of 56 years, Alton James Shropshire, at her side. Kevie, as she was known to friends and family, had been battling cancer for an extended period of time. Kevie was a wonderful woman inside and out. She always had a smile ready for everyone and was a real people person who took delight in others. She loved nature, animals, playing board games, cards and tennis. She was also an avid book reader. Her vibrant spirit and upbeat attitude will be missed by all who knew her. Kevie was a wonderful mom and homemaker throughout her children’s upbringing, but worked outside the home when possible. She was a licensed hairdresser in her early years, and became a legal assistant with the NC district attorney’s office and worked for the City of Charlotte real estate division in her later years. Kevie was born on March 22, 1947 in Keene, NH to her parents, Cleo Joseph Frechette and Cecile Mary Perron Frechette, who have preceded her in death. Her siblings include a sister and two brothers; Joyce Frechette Miller and husband Jim Miller that reside in Dover, NH, Theodore “Ted” Frechette and wife Marie that reside in Cary, NC, and the late Timothy “Tim” Frechette, as well as a brother-in-law, Richard Shropshire and wife Sybil of Burlington, NC. Kevie is survived by her husband, Alton “Jim” Shropshire of Indian Land, SC; her two sons, James Michael Shropshire and wife Charline of Belmont, NC and Christopher David Shropshire and wife Deana of Charlotte, NC. Her late daughter, Elizabeth Marie Lovelace preceded her in death. She leaves behind five grandchildren, Hannah, Holly, Haley, Hayden and Aaron; and numerous nieces and nephews. A memorial service to celebrate the life of Kevie is scheduled for Wednesday, April 27, 2022 at 12:00 noon in the Our Lady of Grace Catholic Church, located at 7095 Waxhaw Highway, Lancaster, SC 29720. Inurnment will be at Arlington National Cemetery, near Washington, DC at a later date. In lieu of flowers, please make donations to Our Lady of Grace Catholic Church, 7075 Waxhaw, Highway, Lancaster, SC 29720. Lancaster Funeral Home & Cremation Service is serving the family of Mrs. Shropshire.

Jane Kevin Frechette Shropshire, 75, passed away at home in Indian Land, SC, Friday, April 1 with her husband of 56 years, Alton James Shropshire, at her side. Kevie, as she was known to friends and family, had been battling cancer for an extended... View Obituary & Service Information

The family of Jane Kevin Frechette Shropshire created this Life Tributes page to make it easy to share your memories.

Jane Kevin Frechette Shropshire, 75, passed away at home in Indian...

Send flowers to the Shropshire family.