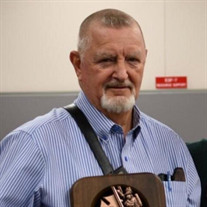 Mr. Howard Stanley Gainer, Jr., 76, of Lancaster passed away Monday, October 4, 2021 at Atrium Health - Pineville. He was born January 26, 1945 in Lancaster, a son of the late Howard Stanley Gainer, Sr. and Annie Mae Rollings Gainer. Mr. Gainer lived a full and productive life. He retired from Lancaster Telephone Co. after 42 years of service. Mr. Gainer had a servant’s heart and was very civic minded. He served as a first responder and fire fighter with the Bell Town VFD for over 50 years. In addition, he served as a volunteer with the Lancaster Fire Department. Mr. Gainer was a reserve deputy with the Lancaster County Sherriff’s Department. He was an active member of Faith Baptist Church and served the Lord as a deacon. Mr. Gainer was also a Gideon. When he wasn’t hunting, fishing or riding on his tractors, Mr. Gainer could be found working at the church. A service to celebrate the life of Mr. Gainer will be held Friday, October 8, 2021 at 3 p.m. at Faith Baptist Church with the Rev. Gerald Eaves officiating. Burial will be in the Faith Baptist Church Cemetery. Mr. Gainer is survived by his wife Nancy W. Gainer of 49 years of Lancaster; three sons, Greg Gainer of Kernersville, NC, Tony Gainer and his wife Laura and Jamie Gainer and his wife Leslie all of Lancaster; three brothers, Melvin Gainer and his wife Alicia, Bobby Gainer and Raymond Gainer and his wife Patti all of Lancaster; two sisters, Mary Culp and her husband Paul of Lancaster and Sarah Lee of Great Falls; and four grandchildren, Natalie, Gaby, Kennedy and Kamdyn. He was preceded in death by a brother, Billy Dan Gainer; and a sister, Carolyn Gainer. The family will receive friends from 2 p.m. until 3 p.m. Friday, October 8, 2021 at Faith Baptist Church and other times at the home of Howard and Nancy. Memorial contributions may be made to Faith Baptist Church, 4695 J.B. Denton Road, Lancaster, SC 29720 or to the Gideon’s International, P.O. Box 140800, Nashville, TN 37214. Lancaster Funeral Home & Cremation Service is serving the family of Mr. Gainer.

The family of Howard Stanley Gainer Jr. created this Life Tributes page to make it easy to share your memories.

Send flowers to the Gainer family.