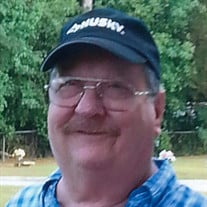 Mr. Hayes Young, 77, of Lancaster, widower of Hosea Sims Young, passed away Saturday, February 29, 2020 at Harris Hospice in Charlotte. He was born February 19, 1943 in Sylva, NC, a son of the late Herbert Young and Nora Queen Young. Mr. Young loved his family, wood working, wrestling, watching the weather and being outdoors. He enjoyed NASCAR and was a Richard Petty fan. He enjoyed spending time with his family and friends. A service to celebrate the life of Mr. Young will be held Wednesday, March 4, 2020 at 3:00 p.m. at the Chapel of Lancaster Funeral Home with the Rev. Marvin Tennant and the Rev. Raymond Satterfield officiating. Entombment will be in the Lancaster Memorial Park Mausoleum. Mr. Young is survived by four sons, Roland Young and his wife April, Cecil C. Young and his wife Hope, Jason Young and Aaron Young all of Lancaster; three daughters, Sheila Satterfield and her husband Raymond of Fort Lawn, Robin Helms and her husband Charles and Marilynn Knight all of Lancaster; two brothers, Walter Young of Sylva, NC and Jack Young of Kershaw; a sister, Gladys Webb of Cullowhee, NC; eight grandchildren; and three great grandchildren. In addition to his parents and wife, Mr. Young was preceded in death by a daughter, Rose Marie Young and several brothers and sisters. The family will receive friends from 6 p.m. until 8 p.m. Tuesday, March 3, 2020 at Lancaster Funeral Home and other times at his home. Lancaster Funeral Home & Cremation Service is serving the family of Mr. Young.

The family of Hayes Young created this Life Tributes page to make it easy to share your memories.

Send flowers to the Young family.