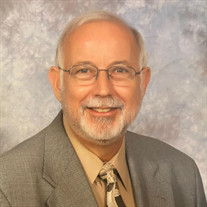 Reverend George Lamar Brasington, 74 of Kershaw, South Carolina went to be with the Lord on Sunday January 9, 2022. He was a generous, humble, hard-working family man who served the Lord daily. His congregation affectingly called him preacher George. Rev. Brasington proudly served in the Army in Germany after being drafted. After getting out of the military, he married the love of his life, Joyce Caskey Brasington, on September 21, 1968 and was married for 53 years. He was a loving husband and a dedicated father to his three wonderful children, Brian, Sheila, and David Brasington. He adored and loved his Godly mother and his brothers and sister. His father passed away in 1960. His mother, Ruby Faulkenberry Brasington, raised 5 children as a single parent. His fondest memories were of her reading them the bible and taking them to church. In October of 1976, Rev. Brasington felt God leading him to preach and pursued and received his seminary education from USC-Lancaster and was ordained October 22, 1977. He was currently serving as Pastor at Pine Grove Freewill Baptist Church. While under his leadership at Pine Grove major renovations were made to the sanctuary and fellowship hall. He had a deep and abiding love for his congregation as well as an unwavering faith in his Lord. He worked at Dupont for 38 years, driving up to 120 miles round trip to and from Rock Hill as he served at Leslie Free Will Baptist Church. Rev. Brasington loved spending time with his family and going on fishing trips with family and friends. His family time was a priority filled with great love and support. He enjoyed playing Canasta, collecting coins and stamps, hunting, and raising animals. Most of all, he had a great love of growing vegetables that he generously and happily shared with others. He enjoyed spending time with his grandchildren, riding the golf cart, playing in the pool, exploring trails and taking them out for breakfast at his favorite morning hang out, Bojangles. He, without a doubt, lived the love of God that he preached. A service to celebrate the life of Rev. Brasington will be held Wednesday, January 12, 2022 at 11:00 a.m. at the Chapel of Lancaster Funeral Home with the Mr. Wayne Snipes and Rev. Charles Watkins officiating. Burial with Military Honors will be in the Lancaster Memorial Park. Rev. Brasington is survived by his wife, Joyce Caskey Brasington; two sons, Brian Lamar Brasington (Keri) of Rock Hill and David Scott Brasington (Candice) of Norwood, NC; a daughter, Sheila Ann Roberts (Randy) of Elgin, SC; a brother, Richard Glenn Brasington of Lancaster; a sister Alice Faye Peach of Lancaster; eight grandchildren, Victoria Roberts, Holden Roberts, Abigail Brasington, Jacob Brasington, Bradley Jordan Faile, Emerald Andal, Delilah Cook and William McCollum; and four great grandchildren, Bricyn Lee Faile Brooks, Waylon Robert Browning, Everly Ann Faile, and Cayson Jordan Faile. In addition to his parents, Rev. Brasington was preceded in death by two brothers, Robert Earl Brasington and James Louis Brasington. The family will receive friends from 10:00 a.m. until 11:00 a.m. Wednesday, January 12, 2022 at Lancaster Funeral Home. Memorial contributions may be made to Pine Grove Free Will Baptist Church, 1616 McBee Highway, Jefferson, SC 29718. Lancaster Funeral Home & Cremation Service is serving the family of Rev. Brasington.

Reverend George Lamar Brasington, 74 of Kershaw, South Carolina went to be with the Lord on Sunday January 9, 2022. He was a generous, humble, hard-working family man who served the Lord daily. His congregation affectingly called him preacher... View Obituary & Service Information

The family of Rev. George Lamar Brasington created this Life Tributes page to make it easy to share your memories.

Send flowers to the Brasington family.