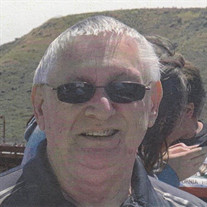 Mr. Frederick Roberts, 78, of Waxhaw, widower of Judith Reilly Roberts, passed away Saturday, December 28, 2019 at Atrium Health – Main in Charlotte. He was born July 9, 1941 in New Britain Connecticut, a son of the late Frederick William Roberts and Mary Gladis Roberts. He loved his family, especially spending time with his grandchildren. He enjoyed helping his family and friends. He spent his time working in his garden, growing flowers, collecting coins and cooking. A service to celebrate the life of Mr. Roberts will be held Sunday, December 29, 2019 at 3:00 p.m. at the Chapel of Lancaster Funeral Home. Mr. Roberts is survived by two daughters, Judith R. Hirtle and her husband Michael of Lancaster and Sandra M. Dauphinais and her husband, Christopher of Hempstead, Texas; three brothers, Steve Roberts, Jim Roberts both of Bristol, Connecticut and Bill Roberts and his wife Doris of Fairfield, Connecticut; a sister, Mary Klimkiewicz and her husband Bill of Bristol, Connecticut; and five grandchildren, Philip Roberts, Jeremy Hirtle, Drew, Danielle and Nathan Dauphinais. In addition to his wife and parents, he was preceded in death by a sister, Gladys Roberts Berardinelli and her husband Pat. Lancaster Funeral Home & Cremation Service is serving the family of Mr. Roberts.

The family of Frederick Roberts created this Life Tributes page to make it easy to share your memories.

Send flowers to the Roberts family.