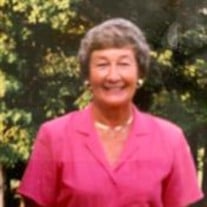 Frances Elaine Wilkerson, 84, of Lancaster passed away at her home following a brief illness on Thursday, August 6, 2020. She was born on February 7, 1936 to the late Milford Henson Tinsley and the late Ruby Jack Culwell Tinsley. Elaine attended Wester Kentucky and graduated with a degree in Secretarial Science. It was at college that she met her beloved husband of 60 years, the late William Wayne Wilkerson. The Wilkersons moved to Lancaster in 1969. Elaine was a very social person! She was involved with volunteer work with the Elliott White Springs Women's Auxiliary and served as president for many years. Her passion, outside of her family was the game of golf. She began playing shortly before moving to Lancaster and then under the tutelage of Muz Pitman she honed her golf game and played until the age of 83. Elaine encouraged players new to golf to keep playing and especially young lady golfers. She taught her sons, Mike and Mitch to play as well as her grandchildren. When playing golf with Elaine, she was insistent that the rules would be followed and proper etiquette observed. If players followed those two guidelines she maintained that they could play on any course and in any tournament. She also held the position of president of the Lancaster Ladies Golf Association for 35 years. In addition to golf, she was a proficient, delightful bridge player and a master of crossword puzzles. She was an avid SC Gamecock fan. High spirited, energetic, cheerful and upbeat describe Elaine throughout her life. She always had a smile, kind words and appreciated each friendship. Elaine loved people, life and eighteen holes of golf. Even after the passing of her dear husband, she continued to live every day to the fullest encountering new friends and adventures. This included seeing her first Cubs game at Wrigley Field at age 80. She felt this was the reason that the Cubs finally won the World Series! She also discovered Starbucks and loved to go with her son Mike and get a mocha Frappuccino. Elaine is survived by her sons Michael Wayne Wilkerson and his wife Salley Iseley Wilkerson of Mountain Brook, Al. and Mitchell Henry Wilkerson and his wife Debbie Garris Wilkerson of Beaufort, SC; grandchildren William Richard Wilkerson, Andrew Michael Wilkerson, Scott Alexander Wilkerson, Miss Salley Rose Wilkerson, Miss Jessica Ann Wilkerson, John William Wilkerson and his wife Lauren Wilkerson; great grandchildren Keagan Wilkerson and Kollins Wilkerson. The family would like to acknowledge the special care shown to Elaine by Dr. Deepak Shah and his staff at Carolina Heart Specialists. Memorials may be made in Elaine's memory to the American Red Cross at 1-800-435-7669. Lancaster Funeral Home & Cremation Service is serving the family of Mrs. Wilkerson.

Frances Elaine Wilkerson, 84, of Lancaster passed away at her home following a brief illness on Thursday, August 6, 2020. She was born on February 7, 1936 to the late Milford Henson Tinsley and the late Ruby Jack Culwell Tinsley. Elaine attended... View Obituary & Service Information

The family of Frances Elaine Wilkerson created this Life Tributes page to make it easy to share your memories.

Frances Elaine Wilkerson, 84, of Lancaster passed away at her...

Send flowers to the Wilkerson family.