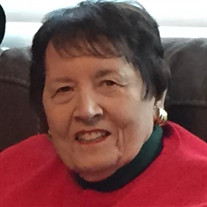 Frances "Fran" Turner Steele, age 76, of Lancaster, South Carolina, passed away on Sunday, August 15, at White Oak Manor, following a courageous multi-year battle with Lewy Body Dementia. She was born in Bellsburg, Tennessee, the eighth of nine children of the late Malcolm H. Turner and Edna Mae Turner. She was a proud 1962 graduate of East Nashville High School, where she played basketball, volleyball, and tennis. She has called Lancaster her home since 1968. Fran was a devoted mother and grandmother, and enjoyed selling cars at Sonny Bowers Dodge Chrysler, and selling Christmas trees at Steele's Grocery. She is survived by her daughter, Kimberly M. Hefner and son-in-law, Mark Hefner of Lancaster, and her granddaughter, Catherine Mattevi of Anderson, SC. She is also survived by her brother, James (June) Turner of Goodlettsville, Tennessee and several nieces and nephews, including a special niece Tina Hamilton of Boiling Springs, SC and her family. The family will receive visitors at the parlor of First ARP Church of Lancaster from 2 to 4 pm on Saturday, August 21. The family would like to thank Dr. Lingoes and the staff of White Oak Manor Lancaster for their excellent care. The family would also like to thank Dr. William Morris for an early diagnosis. In lieu of flowers, memorials may be made to LBDA (www.lbda.org) or White Oak Manor, 253 Craig Manor Road, Lancaster, SC 29720. Lancaster Funeral Home & Cremation Service is serving the family.

The family of Fran Turner Steele created this Life Tributes page to make it easy to share your memories.

Send flowers to the Steele family.