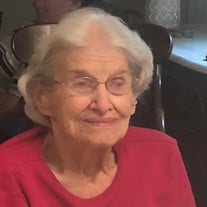 Mrs. Elizabeth “Lib” Smith Hutchinson, 93, of Lancaster, widow of John W. Hutchinson, passed away Thursday, February 10, 2022, at Westminster Health and Rehab, Rock Hill, SC. She was born November 20, 1928, in Bethune SC, to the late Paul Newman Smith and the late Virginia Watts Smith. Mrs. Hutchinson was a graduate of Lancaster High School and Winthrop College. She served for 37 years in the Lancaster County School System, first as an elementary teacher before being named principal of Central Elementary. Mrs. Hutchinson was a member of First Methodist Church and United Methodist Women where she was active in her circle and on the altar guild committee. A service to celebrate the life of Mrs. Hutchinson will be held Monday, February 14, 2022 at 2 p.m. at First United Methodist Church with the Rev. Neal Woods officiating. Burial will be private. Mrs. Hutchinson is survived by two sons, Bill Hutchinson of Camden and Rick Hutchinson (Patti) of Mt. Pleasant; her sister, Mary Kirk Gibson (Dick) of Rock Hill; five grandchildren and four great grandchildren. In addition to her husband and parents, she was preceded in death by her siblings, John Smith, Pauline Gramling, and Barbara Watkins, and her daughter-in-law, Chris Hutchinson. The family will receive friends at the church following the service. Memorial contributions may be made to First United Methodist Church, 200 West Gay Street, Lancaster, SC 29720. Lancaster Funeral Home & Cremation Service is serving the family of Mrs. Hutchinson.

The family of Elizabeth Smith Hutchinson created this Life Tributes page to make it easy to share your memories.

Send flowers to the Hutchinson family.