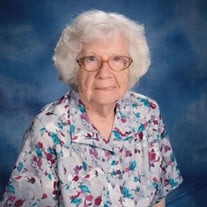 Mrs. Dorothy Jean Moorefield Smith, 97, of Lancaster, widow of Lt. Col. Robert A. Smith, USAR, passed away Sunday, February 7, 2021 at MUSC-Lancaster. She was born March 21, 1923 in Lancaster, a daughter of the late James Harvey Moorefield and Sara Adams Moorefield. Mrs. Smith is survived by two daughters, Sheila Broome of Lancaster and Kerry Dyer (Jonathan) of Georgetown, Texas; a granddaughter, Melanie Dyer of Austin, Texas; three brothers, Ben Moorefield, Dan Moorefield and William Moorefield all of Lancaster; and many nieces and nephews. In addition to her parents and husband, Mrs. Smith was preceded in death by three brothers, C.D. Moorefield, David R. Moorefield and James H. Moorefield, Sr.; and two sisters, Kathryn M. Simon and Ann Carter. Mrs. Smith was an active member of Douglas Presbyterian Church for many years. Interment will be next to her husband of 57 years in a private service at Douglas Church. Due to COVID, a memorial service for Mrs. Smith is being deferred until later this year. In lieu of flowers, the family requests memorial contributions may be made to Douglas Presbyterian Church, 2325 Sunday Place, Lancaster, SC 29720, in her memory. Lancaster Funeral Home & Cremation Service is serving the family of Mrs. Smith.

The family of Dorothy Jean Moorefield Smith created this Life Tributes page to make it easy to share your memories.