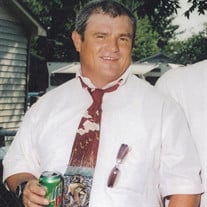 Mr. Danny Lee Terry, 59, of Lancaster passed away Thursday, April 22, 2021 at MUSC-Lancaster. He was born January 20, 1962 in Lancaster, a son of the late John Lewis Terry and Marazine Stone Terry. Mr. Terry was a loving son, father, grandfather, brother, uncle and friend. He loved singing karaoke, dancing, cooking, and making people laugh. Mr. Terry enjoyed riding his motorcycle, shooting pool, and spending time with his family. He loved life, lived it to the fullest, and did it his way. A service to celebrate the life of Mr. Terry will be held Thursday, April 29, 2021 at 3 p.m. at Lancaster Funeral Home Chapel with the Rev. Mike Catoe officiating. Burial will be in the Lancaster Memorial Park. Mr. Terry is survived by a son, Danny Lee Terry, II of Lancaster; a daughter, Leah Michelle Terry of Lancaster; a brother, Tony James Terry and his wife Mindy of Aynor; a sister, Judy Terry McCorkle and her husband James of Sanford, FL; and two grandchildren, Laylah Brooke Terry and Nigel Brower James. He was preceded in death by a brother, Johnny Thomas Terry. The family will receive friends from 2 p.m. until 3 p.m. Thursday, April 29, 2021 at Lancaster Funeral Home. Lancaster Funeral Home & Cremation Service is serving the family of Mr. Terry.

The family of Danny Lee Terry created this Life Tributes page to make it easy to share your memories.

Send flowers to the Terry family.