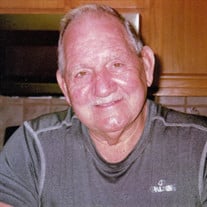 Mr. Charles Turner Hinson, 82, of Lancaster passed away Wednesday, April 27, 2022 at Hospice of Union County, in Monroe. He was born August 30, 1939 in Lancaster, a son of the late Charlie Nelson Hinson and Nancy Elizabeth Dease Hinson. Mr. Hinson was preceded in death by his first, wife Peggy Funderburk Hinson and then to his second wife, Linda Watts Hinson. He was a member of Union Baptist Church. Mr. Hinson retired from General Tire and he was an avid Clemson fan. He loved to fish and be outdoors and enjoyed boating and going to Catawba River. A memorial service to celebrate the life of Mr. Hinson will be held Wednesday, May 4, 2022 at 2 p.m. at Bethlehem Baptist Church with the Rev. Patrick Blackmon and Rev. Catlin Rollins officiating. Inurnment will be in the Bethlehem Baptist Church Cemetery. Mr. Hinson is survived by two daughters, Cathy Hinson Allen and her husband, Terry of Gastonia and Carol Hinson Draughn and her husband Doug of Mt. Airy, NC; a brother, Roger Alton Hinson and his wife Belinda of Duncan, SC; a sister, Brenda Hinson Hegler of Villa Rica, GA; six grandchildren, Jennifer Lane and her husband Ben, Logan Draughn and his wife Julia, Adryan Jordan and her husband Aaron, Andi Schnuck and her husband Max, Josh Allen and his wife Cassy and Claire Draughn; nine great-grandchildren; and the extended Watts family. He was preceded in death by a brother, James Sonny Hinson. The family will receive friends from 1 p.m. until 1:50 p.m. Wednesday, May 4, 2022 at Bethlehem Baptist Church. Memorial contributions may be made to Union Baptist Church, 5003 Taxahaw Road, Lancaster, SC 29720 or to Hospice of Union County, 700 West Roosevelt Blvd. Monroe, NC 28110. Lancaster Funeral Home & Cremation Service is serving the family of Mr. Hinson.

The family of Charles Turner Hinson created this Life Tributes page to make it easy to share your memories.

Send flowers to the Hinson family.