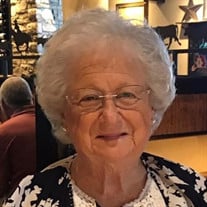 Mrs. Barbara Ann Leaird Burgess, 81, of Lancaster widow of Johnny McBride and James Walter Burgess, passed away Thursday, May 20, 2021 at Lancaster Health and Rehabilitation. She was born July 26, 1939 in Jefferson, a daughter of the late Barney... View Obituary & Service Information

The family of Barbara Ann Leaird Burgess created this Life Tributes page to make it easy to share your memories.

Send flowers to the Burgess family.