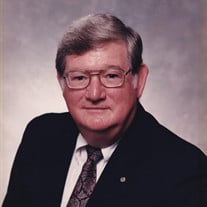 On June 26, 2021 Arthur Merritt Burch, 85, passed away peacefully at his home surrounded by his loving family. Arthur was born to Walter L. and Verna R. Burch in Inman, Georgia in 1935, the ninth of ten children. He was a member of Inman United Methodist Church in Inman, GA where he sang in the choir, served as Treasurer, and served on various planning committees as well as maintaining the facility and cemetery. Upon moving to Lancaster, South Carolina, he joined First United Methodist Church where he taught Sunday school in his earlier years. Arthur attended Berry College in Rome, GA where he met the love of his life, Jeanne Hourigan, to whom he remained married for almost 65 years. Arthur completed his education at Georgia State University where he earned a Master of Business Administration degree. During these years, Arthur joined the Army Reserve and served during the Cold War and the Vietnam War in the Military Payroll Department. He worked for Southern Life and then Life of Georgia in Atlanta, GA until he was hired as Vice President of Kanawha Insurance Company in 1978. After moving, Arthur made Lancaster very much his new “hometown.” He served on the Downtown Association, working tirelessly with other members to revitalize the downtown area. He also served with The United Way of Lancaster. Arthur never stopped learning. He believed in education, guiding and directing numerous employees of Kanawha Insurance Company to advance their educations, enriching many lives. He continued his own education through the LIMRA Leadership Institute, The American College to become a licensed financial advisor, and as a fellow of the Life Fellowship Institute and The American College of Life Underwriters, becoming a Chartered Life Underwriter. In 2000, Arthur retired from Kanawha Insurance Company as President of Marketing and was honored for his years of service to the Springs family with a scholarship named after him at the University of South Carolina at Lancaster to be utilized to provide financial support for students striving to earn degrees in business. But, of all of Arthur’s accomplishments, his ability to be a wonderful husband, father, grandfather, and uncle was by far his best achievement. His grandchildren have been thoroughly enriched by knowing him and being loved by him in more ways than he will ever know. Arthur was first and foremost a family man. Arthur had a passion for farming and raised Hereford cattle on his grandfather’s farm which he bought after his aunt’s death. He worked all week in downtown Atlanta and retreated to his farm in Inman where he spent his weekends raising his two girls, caring for his mother, and tending to his crops and cattle. After moving to Lancaster in 1978 he continued his love of farming by purchasing property on Old Porter Pond in the Buford community and raising a garden every year. In 1998-99, his wife and he built their dream home on the property where he retired, farming and fishing for as long as he was able. Anyone who knew Arthur said he was the epitome of a Southern gentleman, and everyone enjoyed spending time with him. Arthur is survived by his wife and two daughters: Ruth (Doug) Cooley of Matthews, NC and Elizabeth (Ray) Arant of Lancaster, a very special niece, Dr. Alice Hardin of Asheville, NC as well as five grandchildren: Josh (Shelby) Arant, Kaleb (Savannah) Arant of Covington, VA, Phillip Arant, Sean (Austin) Cooley, Skye Cooley of Charlotte, NC, his brother Abb (Mary) Burch of Jonesboro, GA, Fran Crumbley of Hiawassee, GA, Sister-in-law Jane Burch of Cartersville, GA, Sister in-law Jane Hourigan of Lexington, KY, Brother-in-law Ted Bridgewater of Louisville, KY and a very special brother-in-law and sister-in-law Herman and Darnell Hourigan Davis of Spring Hill, TN. He also has more than fifty nieces and nephews he loved dearly. He was especially proud of his great grandson, Ryker Cooley who brought so much joy to him in the last month of his life. He was preceded in death by his parents and siblings: Walter F. Burch (Bea,) Gray Burch (Mary Nell,) Commander Mary Jean Burch, Iris Burch (Becky,) John Burch, Eva B. Hardin, and Bessie B. Buttram (Lee Ross.) After an extended time of illness and caregiving, the family requests privacy during this time of loss; however, a visitation will be held Wednesday, June 30 from 6:00 – 8:00 PM at Lancaster Funeral Home. A family memorial service will be held at a later date in his home church in Inman, Ga with burial in the family cemetery. In lieu of flowers, memorials may be made to the Educational Foundation of USC - Lancaster, “For Arthur M. Burch Scholarship”, PO Box 889, Lancaster, SC 29721. Lancaster Funeral Home & Cremation Service is serving the family of Mr. Burch.

On June 26, 2021 Arthur Merritt Burch, 85, passed away peacefully at his home surrounded by his loving family. Arthur was born to Walter L. and Verna R. Burch in Inman, Georgia in 1935, the ninth of ten children. He was a member of Inman United... View Obituary & Service Information

The family of Arthur Merritt Burch created this Life Tributes page to make it easy to share your memories.

Send flowers to the Burch family.