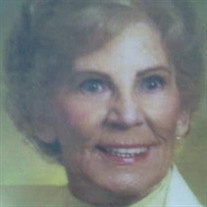 Ann S. Taylor departed her earthly existence on the evening of August 18, 2020, after a life filled with service and action. She was born on October 13, 1926, and lived nearly all of her years in Heath Springs, South Carolina, a place she loved dearly and made better along the way. She was predeceased by her parents, John and Leona Shehane; by her husband, Blake Elton Taylor, Sr.; and by her sister, Mary Frances Catoe. Surviving are a son, Blake E. Taylor, Jr. (Grace Ann) of Lexington, SC; a granddaughter, Tonya F. Taylor of Lexington, SC; and a grandson, Blake E. “Tripp” Taylor, III (Elizabeth) of Lexington, SC. Ann was a longtime member of Heath Springs Baptist Church where she worshipped her God and served Him in several ways. She was a member of the Choir; a former Sunday School teacher (who also taught in the AWANA program); Church Treasurer for more than twenty-five years; and a member of the Pulpit Committee that brought the current Pastor to the Church. She purchased and donated a home to provide residential care for Missionaries while they are back in the United States between foreign assignments, making the Elton and Ann Taylor Mission House part of the Heath Springs Baptist Church campus. Ann’s working career was in the administrative offices of Leroy Springs & Company. Upon retirement, she took her previous community volunteer role to the next level, becoming a candidate for elected office. Ann initially served for six years on Town Council, followed by twenty-seven years as Mayor. Among the hallmarks of her tenure were the extension of Town limits, beautification, addition of sidewalks to many more areas, expansion and upgrade for both the water and sewer systems, renovation and enlargement of Town Hall, and conversion of the historic Train Depot into an attractive event venue. A Fourth of July celebration with a parade, food vendors, and musical entertainment was instituted, and it has become a tradition for which the Town is known. The Heath Springs Industrial Park was established, with one company now in operation and room for more to be recruited. In addition to her contributions directly to the Town of Heath Springs and surrounding community, Ann served actively on the Board of Directors for the Lancaster County Economic Development Corporation; on the Board of Directors for the Catawba Regional Council of Governments; on the Board of Trustees for Connie Maxwell Children’s Home; and on the Board of Visitors for Charleston Southern University. She has also been recognized by the Lancaster County Council on Aging for her dedication to that organization’s mission, and she received the Hattie Rickett Leadership Award from the South Carolina Municipal Association. Upon the conclusion of her final term as Mayor, Ann was honored with Resolutions by both the South Carolina House of Representatives and the South Carolina Senate. She was previously awarded an Honorary Doctor of Public Service Degree by Charleston Southern University. Ann was a child who grew up during the Great Depression and a young woman whose life was further shaped by being a wife and mother back home while her Navy husband served first in the Atlantic Theater and finally in the Pacific Theater during World War II. Although humble, she was a person of grit and tenacity who was prepared to meet whatever challenges came her way. Always frugal, she was at the same time generous, sharing her blessings later in life by endowing scholarships at Charleston Southern University and at the University of South Carolina Lancaster. She leaves behind a legacy of faithful service and commitment, and a model of how to make a difference whenever and wherever there are opportunities to do so. Due to the current COVID-19 Pandemic, a private graveside service with immediate family only in attendance was conducted by Rev. Dr. Frankie J. Melton on August 22, 2020. A public memorial service will take place at a later date. Friends and colleagues who would like to make contributions in her memory are encouraged to send them to either Heath Springs Baptist Church, Taylor Mission House, Post Office Box 400, Heath Springs, SC 29058; Connie Maxwell Children’s Home (main campus), 810 Maxwell Avenue, Greenwood, SC 29646; or Charleston Southern University, 9200 University Boulevard, Charleston, SC 29406. Lancaster Funeral Home & Cremation Service is serving the family of Mrs. Taylor.

Ann S. Taylor departed her earthly existence on the evening of August 18, 2020, after a life filled with service and action. She was born on October 13, 1926, and lived nearly all of her years in Heath Springs, South Carolina, a place she... View Obituary & Service Information

The family of Ann S. Taylor created this Life Tributes page to make it easy to share your memories.

Ann S. Taylor departed her earthly existence on the evening of...

Send flowers to the Taylor family.